Comparing Our Neighbors: A Park Analysis

Written by PCPW Co-Chairs on November 12, 2020. Posted in Uncategorized

We’ve always been struck by the wide range of opinions concerning Worthington’s park system and how it compares to our neighbors.  In gathering petition signatures and conducting research, we talked with many people: supporters, other community members, council members, and city staff.  In all cases, this topic came up repeatedly and everyone had some point of view!

We decided to do an analysis of other community parks in central Ohio. We were motivated to take on this analysis to better understand the feedback received, ranging from Worthington being “over-parked” to a multitude of cries for significantly more park space, especially for soccer fields.

For each community, we identified its “signature” park.  The criteria we adopted for such a greenspace or commons includes:

Our first learning is that Worthington today, falls somewhat short of its neighbors in terms of being “well-parked”.  At 221 total park acres Worthington sits at 60% of the average for the twelve surrounding communities included in this survey.  Indeed, Worthington has less than half as much park acreage as neighboring Dublin (629 acres), Westerville (650 acres) or New Albany (2000 acres).  It does come out ahead of both Granville and Grandview in terms of total park acreage.

To be fair, Worthington is land-locked with fewer options for acquiring and developing parklands than surrounding communities.  But doesn’t this actually emphasize the criticality of developing the UMCH parcel as Worthington Commons?  According to our comparative analysis, doing so would add 27 – much needed – acres of greenspace, and do so in the center of our town.

We recognize that we need more housing, but argue it can be built many places around Worthington; more than 20 locations have been identified.  On the other hand, we think all would agree the UMCH parcel is the only place where Worthington Commons can be located.  Indeed, with progressive city leadership, Worthington can have both a commons and significant residential development!

Our other major learning was the amazingly diverse set of amenities that parks surrounding Worthington offer their residents.  Frankly, some of these amenities both surprised and impressed us; ranging from bocce courts to a cricket pitch, to a sledding hill!  We think this list of amenities can stimulate community thinking in terms of what is right for Worthington.  A critical piece of the amenity conversation, though, is cost of various amenities. 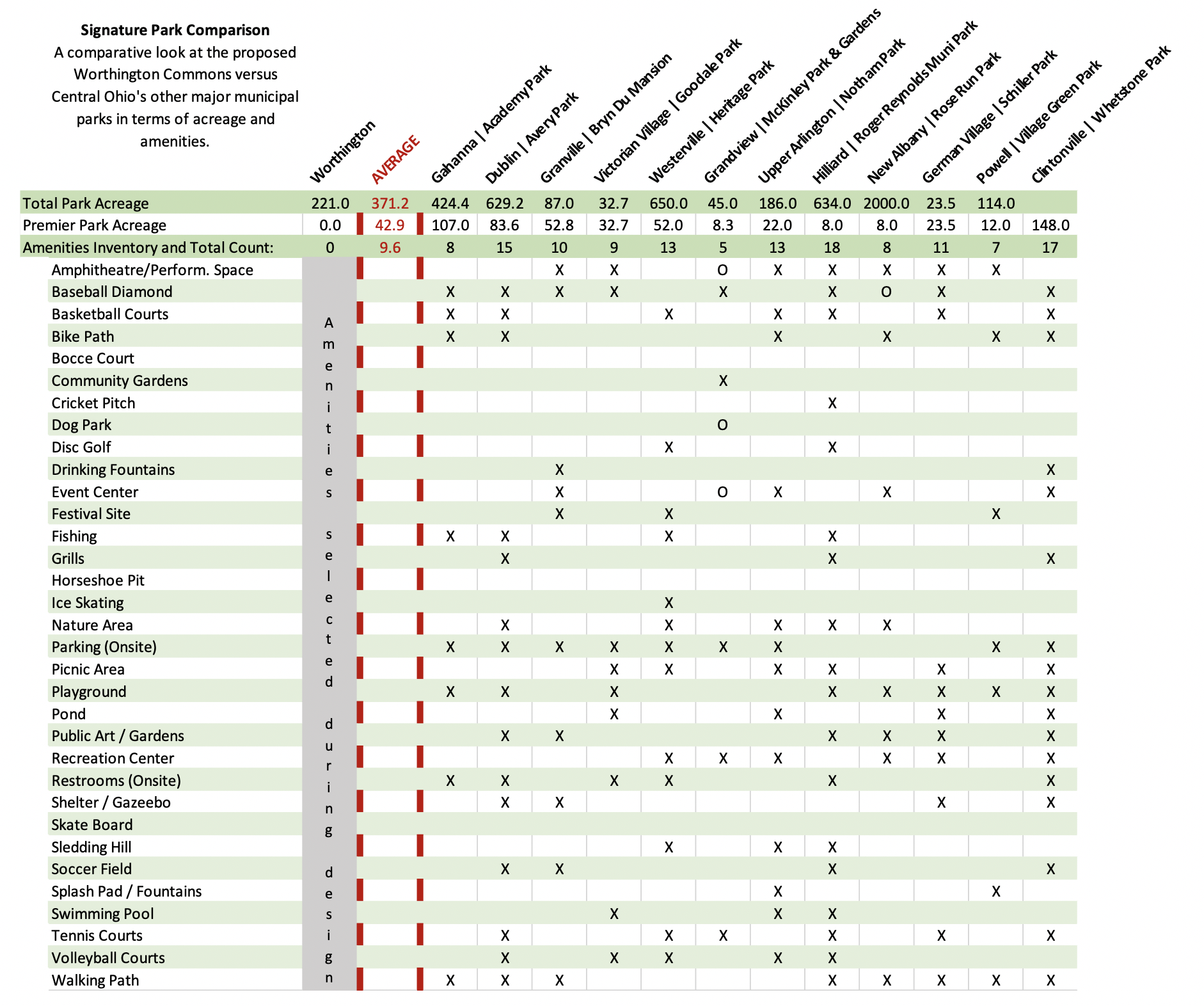